The Secretary General of The British Chamber of Commerce for Italy and the team manage the day to day running of the BCCI and are in touch on a daily basis with our Members.

Aaron was born in Milan, Italy and educated in the English speaking school system from an early age. A graduate in International Affairs with a minor in International Economics from the American University of Paris, Aaron returned from France in 1999 to join his family’s business, RE Participazioni e Organization d’Azienda SpA (Gruppo RE), a holding company with 12 subsidiaries focused on financial and real estate services for large Catholic Institutions.

During his fourteen years involvement with Gruppo RE, Aaron served on the Permanent Committee for Orientation and Control and was part of the executive management team, responsible for an aggregate turnover of 100 million euro and 190 employees. His experience spans from business development, financial analysis, set up and launch of an advertising agency (Pubblietica Srl), to complex projects ranging from transformation and dismissal of large real estate properties (Il Consulente RE). Aaron has led teams of experts through strategic analysis, data mining, internal and external approvals including Canon Law and Civil Law.

In 1999, he co‐founded Easy Milano, the first publication in Milan focusing on English‐speaking residents. Easy Milano has since become a preferred network and source of information for the expat community and a communication channel for many consulates, embassies and English speaking businesses and associations in Milan and Italy. In 2002, with experience from Esse.F. srl, a communication and publishing agency within Gruppo Re, Aaron branched out and started an independent communication agency, B Easy Srl, focusing on the local international community. B Easy Srl is the current publisher of Easy Milano, MammamiaKids and offers other marketing and graphic services to corporate clients. B Easy is also noted for its event division and the organization of annual community events such as J4Milan Independence Day Celebration and the U.S. Presidential Election Night.

In November 2015, Aaron joins the Council of the Chamber and gets involved in the projects such as the annual BCCI Gala and the Diversity is Key project.

Aaron is fluent in four languages and is interested in international relations, social behaviors and traveling. He is married to a New Yorker and has two children. 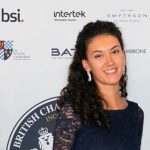 A graduate in International Relations (International Politics & Regional Dynamics) from the University of Milan, Margherita joined the Chamber in October 2020. She is passionate about cross-cultural dialogue and international affairs and speaks Italian, English, French, German and Russian.

Maria Luisa joined the BCCI in April 2009 as Marketing & Communication Manager with particular responsibility for event management and communication services including the website and social media.

Maria Luisa is a Foreign Languages graduate with focus on Mass Media Communication at Università Cattolica del Sacro Cuore in Milan. She is Italian and speaks English, German and French.

She started her career in Munich, where after her first experiences in marketing, she switched to the airline industry, joining Alitalia’s Customer Care Department.
After returning to Italy in 2002, she worked for almost 2 years at GlobeGround (Linate Airport), as Customer Service Agent for Lufthansa and British Airways.

Subsequently, in 2005 she entered the Italian Corporate Communications Department at Siemens, where she gained significant professional experience in internal and external communications.

Maria Rosa joined the BCCI in 1987 and is currently Business Development Manager.

Over the years she has collaborated in ELCS (English Language Consultancy Service) and managed the commercial services section. In 1996 she introduced and implemented the Vat Recovery Service enabling the BCCI to enhance the services provided to its members and to British and Italian companies.

In her role, Maria Rosa is one of the primer interfaces of the Chamber with members, potential members and partners. She has also given great attention to sponsorships of various events and seminars, taking an active part in their design, thereby allowing BCCI members to gain greater visibility through dedicated events.

Susan has been running the ELCS since 1989.

She initially trained as a Drama teacher at Padgate College, Manchester Victoria University, and took an optional course in Teaching English as a Second Language. After a particularly long, dark winter, she left the UK in search of the sun and taught in Tripoli, Libya, and Freeport, Bahamas, before returning to Europe and specialising in Teaching English as a Foreign Language to adults and businessmen.

Susan then taught managers on intensive one-to-one programmes, organised summer courses at UK universities, and managed language schools in Spain and Italy. She set up the Italian subsidiary of a leading multinational specialising in language training for professional purposes and was often asked for advice on courses in the UK (which was the part of her job that she liked best….).

As her company specialised in business English, Susan couldn’t satisfy all the requests she received and she wanted to help a wider audience, so she moved to the British Chamber of Commerce for Italy and has been advising students on the best courses in the English-speaking world ever since.