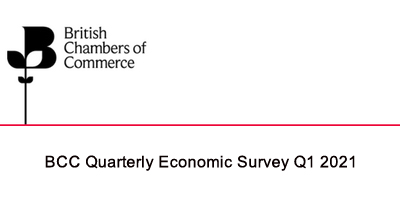 However, the bellwether survey of 6,103 firms, who employ almost a million people across the UK, revealed that business confidence has been boosted in the first three months of 2021 amid the strong vaccine roll-out and the government’s roadmap providing some ability for companies to forward plan.

Overall, indicators of immediate business conditions remained troubling in Q1, with some deterioration from Q4 2020 and all key indicators still well below pre-Covid 19 levels.

40% of firms reported a decrease in domestic sales in Q1, 32% reported no change, and 28% reported an increase.

Business to consumer (B2C) firms saw the largest falls in domestic sales in the quarter. 83% of hospitality and catering firms reported decreases in Q1, higher compared to 79% in Q4, but lower than in Q2 2020 (94%).

Sectors with more scope to continue their operations through the pandemic, including shifting to remote working, saw some improvement, albeit not close to pre-pandemic levels. 35% of both Professional Services and Marketing & Media firms reported increased sales in Q1, up from 29% and 28% respectively in Q4 2020. With those reporting decreased sales standing at 29% and 33% respectively in Q1, significantly down from 35% and 44% in the last quarter.

Our latest survey indicates a particularly difficult first quarter of the year for the UK economy, as a third lockdown and post-Brexit border disruption weighed heavily on key indicators of activity.

We are currently witnessing a two-speed services sector. Consumer-focused services companies, where activity is most limited by lockdown controls, suffering an especially damaging quarter. In contrast, business and professional services firms, where adapting to operate under restrictions is more straightforward, fared markedly better. Manufacturers had a challenging three months, with delays to supply chains caused by the ongoing disruption to post-Brexit trade weighing on the sector.

The marked improvement in business confidence suggests that the expected first quarter contraction in output will be the nadir for the UK economy in 2021. However, the economic scarring from Covid may mean that the recovery is dramatically uneven across different sectors, locations and cohorts of people.

Head of Economics , The British Chambers of Commerce (BCC)

Cash flow continued to deteriorate for 41% of firms in Q1. 20% of firms reported an improvement in cash flow, 39% reported no change. Levels are broadly unchanged from Q4, which itself showed little improvement from Q3 following the historic lows in Q2 2020.

Cash flow indicators continue to worsen most severely for hotels & catering firms. 8 in 10 (81%) of these firms reported a decrease in cashflow in Q1, up from 77% the previous quarter, with only 7% reporting an increase.

In the services sector, the balance of firms reporting improved cashflow increased to -26% from -28% in Q4. Despite continuous improvement from the lowest levels on record, this balance is still at a level comparable to the 2008-09 recession.

In the manufacturing sector, the balance of firms reporting improved cashflow decreased to -17% from -15% in Q3.

Just under a third of firms (30%) continue to report decreased investment in plant, machinery and equipment. This is a small improvement from Q4, when 35% reported a decrease, and follows Q2, which had the largest proportion of firms revising down investment in the history of the QES dataset.

Over half (51%) expected no change in plant, machinery and equipment investment, up slightly from 48% in Q4. Just 19% of firms plan to invest, a marginal improvement from 17% in Q3.

The fieldwork for QES was gathered largely before the spring budget and the Chancellor’s announcement of the super-deduction capital allowance.

55% of firms overall said they expected their turnover to increase over the next 12 months, the highest since Q1 2020 (the last pre-pandemic quarter) and an increase from 40% in Q4. 22% expected it to decrease, a decrease from 34% in the previous quarter, and 23% expected no change.

In the services sector, the balance of firms reporting expecting turnover to increase over the next twelve months rose to +24% in Q1 2021, the highest since Q1 2020 and up significantly from -3% in Q4 2020.

In the manufacturing sector, the balance of firms expecting turnover to increase over the next twelve months increased to +33% in Q1, the highest since Q1 2020 and up significantly from +12% in Q4.

This increased confidence was on display when one owner of a micro services business based in Surrey told us – “I can see a glimmer of light at the end of the tunnel”.

However, the severity of the current situation was also evident in the comments of other businesses. The owner of one micro professional services firm in Glasgow said “After 31 years of contributing to the economy, our business has been decimated by loss of sales due to Covid-19. We are almost at the end of the line and extremely worried that our business may not survive.”

Another business owner in the tourism and hospitality sector in Cumbria told us “We are closed and soon will have been for over three and a half months. In that time, we have had no income but still plenty of costs. We lost £150,000 last year and will lose another £50,000 in the first quarter of this year.”

Our findings today demonstrate that businesses are beginning to see optimism emerge from the lowest point of the crisis however much remains to be done to ensure that optimism is borne out into prosperity, and many businesses still face a fight for survival in the coming months.
The damage wrought to trading conditions by repeated lockdowns and issues at the border will not be repaired by renewed confidence alone. The Government must recognise the compounded impact that the combination of the pandemic and Brexit related issues have had on firms up and down the country.”

The hope for growth represented in our findings is contingent upon the Government continuing to hit its target dates for re-opening the economy, successfully rolling out the coronavirus vaccines and providing ongoing support to businesses who have suffered throughout the crisis. Particular emphasis must be placed on those sectors which face continued uncertainty about when they will be able to fully trade again.
Businesses are desperate to play their part in the recovery from the pandemic, and the Government must provide them with the security and certainty that they need to do just that. These first quarter findings show there is a glimmer of hope that the start of rebuilding and renewal for the UK is within reach, though there is no room for inaction or overconfidence.

Now is not the time for complacency, to translate hope into reality there must be a coherent strategy for growth which empowers businesses to lead the economic recovery from Covid-19.