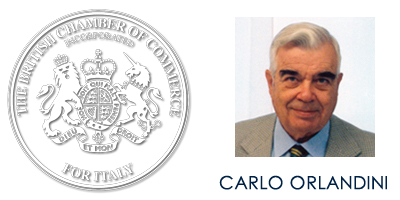 The President, the Council and Staff of the British Chamber of Commerce for Italy are sorry to report the death of dott. Carlo Orlandini, for many years Councillor and Vice-President of the Chamber and latterly Honorary Councillor. Two former presidents of the Chamber, John Murphy and Henry Putnam, paid the following tributes to him.

“Carlo Orlandini was for decades a constant presence at Chamber events, full of old-world charm, good humour and refined intelligence. He always had a smile and a kind word of encouragement or advice for anyone. He was also a Councillor for many years, contributing much of his time and high-level contacts for the good of the Chamber. He will be sorely missed.” John Murphy

“Carlo was my dear friend for 50 years. He was a great Councillor and Vice-President who, though pressed, declined to accept the Presidency, believing that the role should be occupied by a Brit. He was always ready to help whenever a local problem arose and always had the solution. He ran a big supermarket chain ‘Standa’ and became an expert in the development of centri commerciali and food distribution, in which his daughter Beatrice helped him. He also helped to improve the management of some of Milan’s largest hospitals. He was many times guest of honour at Chamber functions and was a spell-binding speaker. I always remember Carlo telling us how, in 1943 aged 15, he acted as a message carrier across the lines when the Allies were advancing north through Italy. One day a German border sentry stopped him and asked him where he was going. Carlo replied, ‘To see my Grandmother.’ To which the sentry replied, ‘Lot of Grandmothers over there today.’” Henry Putnam

Our heartfelt condolences go to his daughter Beatrice, also a former Councillor and an assiduous supporter of the Chamber, and to his family and friends.