#STEAMiamoci Female Protagonists of the Future | Interview with Catriona Graham 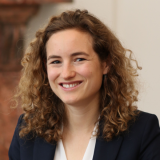 DR GRAHAM, YOU HAVE A DEGREE IN PHYSICS FROM THE PRESTIGIOUS UNIVERSITY OF CAMBRIDGE, AND YOU ALSO HAVE A DEGREE IN SUSTAINABLE ENERGY ENGINEERING. CAN YOU TELL US WHAT MADE YOU CHOOSE STEM SUBJECTS? HOW DID YOUR COURSE OF STUDY UNFOLD?

I actually had a lot of doubts about my potential studies, as I had various interests and was not at all sure about my choice.
At school I was good at science and liked it, but I was also passionate about literature, languages and international relations. Some considerations eventually led to my decision to choose a degree in physics.
Firstly, I believe in the importance of keeping multiple options open when you are young. At the age of 17 (when I finished school) it was too early to understand how many opportunities existed in the world and which path would really be the right one for me. So I tried to make a choice that would give me maximum flexibility so that I could pursue a variety of different paths with my career.
The reality is that I think the transition between the Arts and Sciences is easier in one direction than the other. It was true for me that with a solid foundation in science, I could also later invest in pursuing other passions, including languages, international relations and cultural affairs through my diplomatic career. But I have many friends who would have liked to become doctors or engineers, for example, but for whom this path was interrupted early on because as teenagers they were not interested in mathematics, a very difficult subject to learn in adulthood if you have not invested in it for many years. I honestly believe that a science degree opens many doors for you, from a career in scientific research and innovation, to applied engineering or industrial design, to a career in management or a completely different sector such as government, where mathematics and scientific knowledge is highly valued.
Afterwards, I must also admit that my family had a big influence on my decision. My grandparents are all scientists and have had a fulfilling life of over 90 years in the field, inspiring the same commitment to science in their grandchildren. Of my 21 cousins, only one (a brave man!) has decided to pursue a degree in Art so far! Sometimes STEM subjects can come across as ‘cold’, focused on theory instead of reality, detached from personal relationships, but what my grandparents showed me instead is that science has enormous power to influence people’s lives and change the world for the better. My grandparents were doctors, one an academic neurologist and another a professor of chromatography. Their work changed lives – from caring for patients, to fighting chronic diseases, to making everyday inventions such as covid tests possible (antigen buffers are an example of chromatography in action) – for me this is the real motivation to invest in science, and a reason I hope will attract many more people to the subject.

STILL EARLY IN HER CAREER BUT HAS ALREADY BEEN A HIGH LEVEL OFFICIAL IN THE BRITISH GOVERNMENT FOR OVER 10 YEARS, TODAY SHE IS CONSUL GENERAL IN MILAN AND DIRECTOR OF THE DEPARTMENT FOR INTERNATIONAL TRADE IN ITALY, PREVIOUSLY SHE WAS COMMERCIAL ADVISOR IN THE ENERGY SECTOR AT THE BRITISH EMBASSY IN BEIJING, FURTHERMORE SHE HAS WORKED AT THE EUROPEAN COMMISSION AND IN SEVERAL RENEWABLE ENERGY COMPANIES. CAN YOU DESCRIBE YOUR CAREER PATH? HOW DID YOUR CAREER START AFTER YOUR STUDIES?

When I left university, the problem I wanted to apply myself to, and still do, was the challenge of mitigating human-induced climate change, and I felt that science was a crucial knowledge base from which to work on this.
I thought long and hard about whether I should join industry (e.g. a renewable energy company), the charity sector (e.g. supporting sustainable energy abroad) or consider government. Eventually, after much deliberation, I joined the then UK Department of Energy and Climate Change, because at that time (2010) I believed that policy decisions made by central government were key to setting the conditions for change. And this was indeed the case. A transition to a sustainable future is something that requires the commitment of the whole of society: government, business, citizens, institutions alike. But the policies set out when I joined the UK government, in particular the reform of the energy market and the legally binding commitment to reduce emissions by 2050, have so far proved crucial to the success of our domestic emissions reductions (in the last 30 years the UK has managed to reduce CO2 emissions faster than any other G20 economy, by 44% from 1990 levels).
Since then, energy and climate change have remained the mainstays of my career. I worked for about 5 years within the Department of Energy and Climate Change in London, took several secondments from government to industry, including the European Commission DG Ener, and to the world’s largest offshore wind company, now Orsted.
My already stated passion for international affairs, discovering new languages and cultures, then got the better of me and I decided to take a leap abroad, to China, where I spent four fascinating years, covering the energy sector while learning about a country at the centre of future geopolitics.
I was delighted to have the opportunity after Beijing to move my family here to beautiful Milan, where I once again had the opportunity to work on climate change, through the UK’s partnership with Italy in hosting the COP26 conference in 2021, first in Milan and then in Glasgow at the end of last year. Tackling climate change together continues to be a pillar in our bilateral relationship and in my work here as Consul General.

IN YOUR OPINION, DOES DISCRIMINATION AGAINST WOMEN CHOOSING STEM STUDIES STILL EXIST IN ITALY? WHAT COULD WE DO TO IMPROVE THINGS?

In my opinion there are still more opportunities for women studying STEM subjects, even in Italy.
Almost all the companies I talk to in my work here, and back home in the UK, want to improve the gender diversity of their workforce at senior levels and are looking for talented female graduates, particularly in STEM subjects where there tend to be fewer women in the first place, and it is even harder to recruit with a gender balance.
I think the discussion is partly circular. Once we see more women in senior positions in society, I am hopeful that we will see more women follow in equal positions. Women can ‘pull each other up’ but also act as important role models. It is much easier to feel that you too can reach a certain position if you see someone you can relate to already doing it. So we have to be bold in taking the first leap towards gender equality at the top, and once established, as has already been the case in many organisations in the UK, it will not be a temporary thing.
We must never forget that men have a key role to play in achieving the goal of gender equality and men must be included in the journey towards this common goal. Sometimes I feel that we focus too much on ‘women’s rights’ such as increased maternity benefits and so on, but forget that if we do not offer men the same opportunities on an equal basis, there will always be a gender divide. For example, I am a big supporter of shared parental leave and more paternity-friendly policies, which benefit men but also women in the long run.

WHAT ADVICE WOULD YOU GIVE TO GIRLS WHO LOVE STEM SUBJECTS AND WOULD LIKE TO FOLLOW THIS PATH BUT STILL HAVE DOUBTS AND FEARS?

Go with your instincts. You won’t regret it later if you like the subject. I feel that the influence of the family is important in Italy, as it was for me. But in the end, only you can decide. If you follow someone else’s decision, you will not be happy.
In my opinion, STEM includes subjects with some of the greatest future opportunities to contribute to the changes we all want to see in this world.
A career in science is also a way to see the world. Anyway, that’s how it worked for me. I wish you all the best in whatever decision you make.