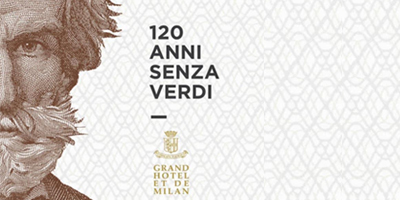 On January 27, 1901, at 2.50 am, Maestro Giuseppe Verdi died in his room at the Grand Hotel et de Milan, which he had chosen since 1872 as Milanese residence. The last days of the Maestro are told as a moment of great emotion for the whole city of Milan: such was the respect felt by the citizens and the City that the streets around the hotel were strewn with straw for several days, to not disturb him with the sound of hooves and carriages and allow him to rest.

Verdi’s death was announced on January 28 by the librettist Giuseppe Giacosa on the pages of the Piacenza newspaper “Libertà”, news that will soon be picked up by all the newspapers and magazines of the time.

By the will of the Maestro, the funeral should have taken place privately, after the body was transferred to the monumental cemetery in Milan, away from prying eyes. But at the first light of dawn of that day the crowd rushed along the path of the coffin from every part of Milan, as the Corriere della Sera described the following day: “[…] the cart passed slowly, wrapped in the morning fog, looking fantastic with its plumes and ruffles; and thousands of men and women walked behind, bumping and pushing into each other, with their heads down with sadness.”

A month later the body was moved to the crypt of the Rest Home for Musicians founded by Giuseppe Verdi himself. On that occasion, the popular participation was enormous: over 300,000 people joined the second funeral procession, led by a choir of 820 voices directed by Maestro Arturo Toscanini singing the “Va Pensiero”.

120 years after his death, the Grand Hotel et de Milan remembers Maestro Giuseppe Verdi, an extraordinary person, capable of uniting and inspiring an entire country, a man whose humanity is profoundly expressed by his ever understanding gaze towards the tormented protagonists of his works.